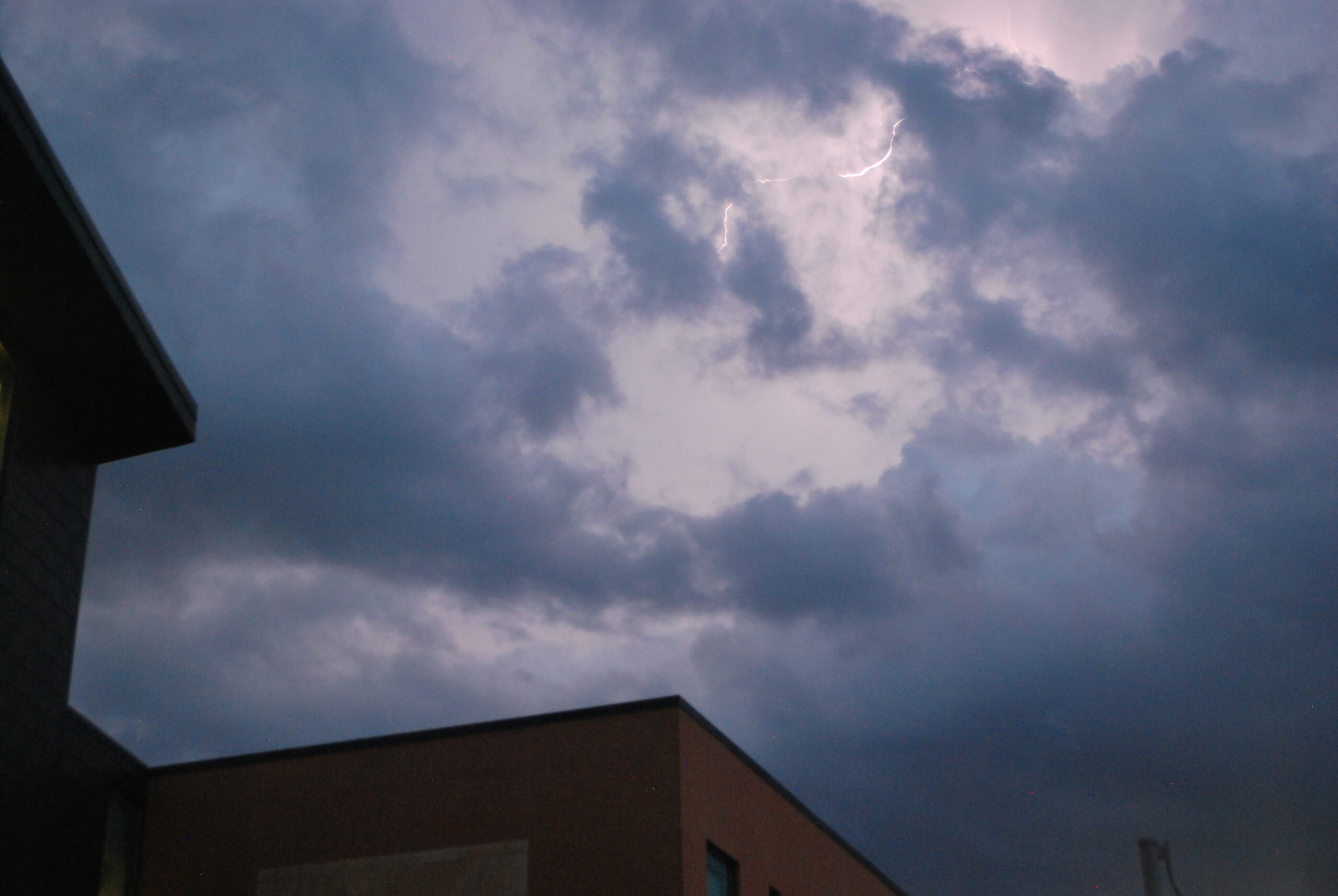 Ruth Kennedy is a Junior English major and theater minor. This essay, written for her Advanced Writing class this January 2022, features a reflection on a memory from her first year in college. The image cover of this article was taken by her on that night.

I have pictures from the first few months of college, taken on my nice camera that I got as a birthday present. I had the freedom and energy of a freshman in college, twelve hours away from home and a month since I’d lived there. At that time, I was determined to leave behind the troubles of the past few years, but unsure how to step into the future. Those early days of college are a distant blur now, the me of that September a distant shade compared to who I am now. But there is one memory that stands out, and I have the pictures to prove it wasn’t just some wild, fanciful dream. I remember standing with my camera pointed to the sky as a thunderstorm bore down, and feeling free and alive.

I did not set out from my college dorm that day to take pictures of lighting and clouds. Plants were my usual subjects. I have the hard drives full of pictures of mountain and backyard plants to show for it. Up north at school, I was interested in the rich autumn leaves, something I did not have back home in the pine-tree dotted plains of Colorado I drove through daily. The Minnesota campus was carefully arranged with beautiful things, trees and flowers and statues set out just right for a picture. When I’d arrived for school, my camera bag tucked in among all my belongings, I know I must have been excited to start taking pictures. It’s a hobby I indulged in regularly, at least before I somehow became even busier than ever.

It was late September, the time of year when college classes were done before the sun set, and there was plenty of light as I set out onto the near empty campus. That was how I preferred it, quiet. It was not the emptiness that comes with being on campus during break and knowing no one’s around. That kind of quietness I can’t stand. It’s like being in an abandoned school during the summer, the shades of students and teachers that should be there haunting the place. The kind of quietness I enjoyed was the kind where you could feel that if you stepped into a building, you’d find it alive with students. Even with those other students nearby, at that moment I was alone, just me and the sky above.

I went out that evening to take pictures of the campus plants. It had rained that day, something I relished about living at school. The lack of rain on my home plains made me sadder every year. I was born in a state with a coast and an ocean, any sign of water made me yearn for a home I didn’t remember. To be someplace where I felt the need to carry an umbrella was exhilarating. The sky had a semi-dreary grey color to it, which also made me excited. I knew it was the best time to take out my camera. Without the sun glaring over my shoulder, I could take pictures of drops of water sitting on delicate white hydrangeas and dripping from speckled orange leaves to my heart’s content.

My camera clicked and clicked, and the sun, invisible behind the clouds, started to dip below the hill my school sat on. Somehow, I ended up wandering to the middle of campus, where I could see every building that would become important to me. An evening storm was slowly rolling in from the south and big, tall, white clouds hovered ever closer. Looking at the pictures now, those clouds remind me of the cotton candy from the carnivals I had worked at during the previous summer, spun of the finest thread. But these did not seem like they would be sticky and leave you with hot sugar clinging cruelly to your arm if you got too close. I thought they would be cool to the touch, soft like silk, and desperately wanted to touch one.

With my attention turned skyward, I saw lighting coming to life in the belly of the clouds, stretching like veins of light over a cottony background before disappearing.

With my attention turned skyward, I saw lighting coming to life in the belly of the clouds, stretching like veins of light over a cottony background before disappearing. The clouds were arranged in such a way that I could see the forks of lightning clearly displayed, the white fluff framing them like a picture. I really don’t remember if I could hear the thunder at that point.  I must have, eventually. I remember other storms seen from school, with thunder that could shake windows and bring dreams to a screeching halt with its crashing. Before that day, for me, thunder meant staying inside to comfort those younger members of the family that jumped or cried at loud noises. I did not have many chances to watch the lightning back then, but at that moment, standing alone in the middle of campus, I could watch. Better yet, I could capture it.

I stood with my camera pointed up at the sky, trying my best to catch those moments when lightning danced through the clouds and along the sky before it was gone forever. My attempts were unsuccessful, having chosen to go the more difficult route of manually trying to capture the lighting instead of finding the rapid shutter button and letting the camera do the work. This was likely due to some combination of unfamiliarity with my camera’s settings, fear of missing the lightning while fiddling around, and an ever-present stubbornness that led to that situation. When I would open up my camera later, I would only find a couple of photos where the lightning was visible. It only served to make me love these pictures more, for they felt hard-earned, once-in-a-lifetime.

I was in that spot in the middle of campus for a while, trying to capture lightning in the bottle of my lens. I probably looked ridiculous, standing there taking pictures of clouds over and over and over again. Before, I may have been wary of appearing too odd. For once, I didn’t care how I looked. The clouds weren’t going to judge me. As the storm grew closer and the sky grew darker, I realized that the buildings were blocking the best view. If I wanted to truly capture the best of the storm, I’d have to move from my spot rooted in the middle of campus. I swung around the Humanities building to face the very south of campus, where the soccer field that I only sometimes remembered existed sat. I found I had been hidden from the true face of the storm this whole time.

Before the clouds had been soft, white pillowy fluff standing against the sharp white of lightning bolts. Now, the darkest clouds were bearing down on me, swirled and webbed across the night sky, not distant but nearly right on top of me. The clouds I had seen before were only canvasses for small bolts of lightning, while these seemed to be holding something far bigger and far more dangerous back. These clouds glowed from within, like behind these thin masses some great and terrible power hovered above me, poorly contained and able to break out at any moment it chose. This storm hovered above me, big and vicious and beautiful. I was tiny, and I was invincible.

At this point, any sensible person would have watched the lightning pushing against the skin of the sky and turned back to their room. I was not feeling sensible that day. Sensible was the weight that I had worn daily for years and I had dropped it the moment I saw lighting dance across my camera lens. Looking back, this is clearly one of the more stupid things I have done in my lifetime. I tried not to indulge in stupidity and a carefree nature as a teenager, because somebody had to be the responsible and serious one. However, stupidity comes for all people, whether they intend it to or not. But it is one thing to stumble into a stupid deed and another grip your camera tightly and stroll straight towards it.

As hard as I tried to capture this dark, towering giant of a storm cloud, it proved even trickier than the neatly framed lightning from before. Street lamps and car lights sent pale rays across my lens, intruding on the dark mass above. I almost wished that the storm would knock out the lights, leaving the world to be illuminated by nothing but the flashes of lightning pushing against the bottom of the sky. That would have been a sight to behold. However,  that was not the scene I found that night nor were those the photos I ended up with. If I ever actually showed these pictures to people, I imagine they would question why I hold on to them, given how often the glare would attack the lens. I’ve thought about taking those old photos and editing out every man-made thing until only the storm remains. Then I worry about losing the memory of that night as it was, imperfect streetlights and all. So I keep the pictures as is. I feel that the storm is all the more impressive when you can compare it to the tiny lights below.

In my mind, it rained, long and hard and mighty, something worthy of the clouds I had stood under.

I did, eventually, remember to pick up my sense where I had dropped it and left that beautiful storm behind. At that point, I couldn’t even pretend there was enough light out to justify standing there, and I’m sure the thunder was rattling my lungs by then. I had read many stories and knew that I had tempted fate enough for one night. I went inside before any rain came. I don’t even remember if it did rain that night, or if it was a dry storm having nothing to offer the world but darkness and electricity. In my mind, it rained, long and hard and mighty, something worthy of the clouds I had stood under. That’s what made the storms even more exciting to me, that wild symphony light and sound and water filling the air.

I’d never been particularly interested in watching thunderstorms before this day, but now it is all I want to do. Even as I became so busy that my camera found a permanent home tucked away in my closet, I sat inside and watched lightning dancing outside my window. I have not had another night where I felt the courage that comes from wild abandon and stood outside to watch a thunderstorm approach until I could breathe its air and feel its pressure. But I have not lost that spark I felt, that feeling of wild insensibility and freedom, standing under those clouds. I am excited for the rainy season, when storms gather and I can watch as lightning arches and cracks along the sky. When I return to my dry home, I have pictures and a memory of standing beneath the storm.