Thinking on Paper: Where I Sit on Netflix’s “The Chair” by Libby Kassuelke 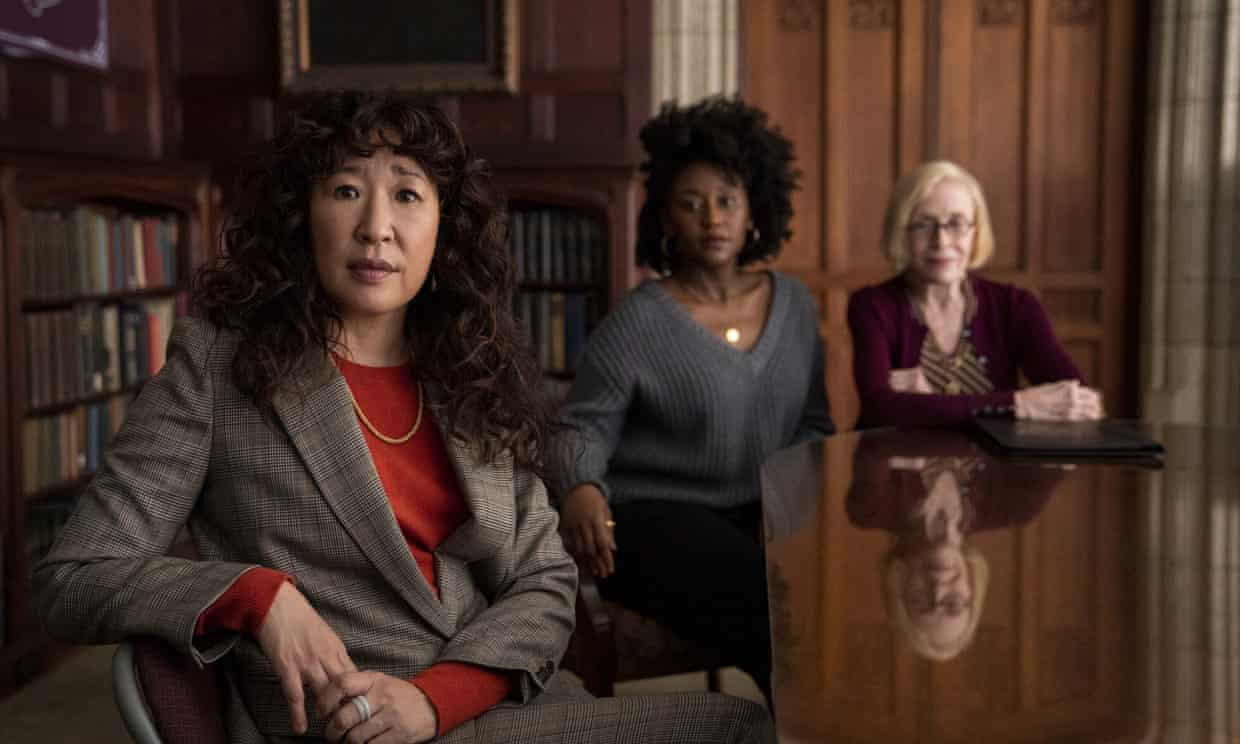 The Chair, Netflix’s new original TV drama-comedy, has been a topic of debate since its recent August release. The show centers around Dr. Ji-Yoon Kim (played by Sandra Oh) the newly established chair of the English department at Pembroke University. She is the first female and minority department head. Unfortunately, in her own words, she has “arrived at the party after last call.” Her time as chair is riddled with controversy concerning ageism, racism, and sexism. Amid all of this, one particular scene that highlights generational disconnect and cancel culture has been stuck in my head.

Episode 3, “Town Hall,” starts with Professor Bill Dobson (Jay Duplass) in a meeting with “reputation management.” After performing a satirical Nazi salute in one of his classes, Dobson is under fire from students. The salute was recorded and has spread across campus with no context. Dobson does not take the request to write a formal apology seriously. Instead, he insists on having a town hall meeting with the upset students. He believes that the students are right for speaking out about what they feel strongly about but remains sure he is not in the wrong. He finds it a matter of free speech.

The town hall starts well with open discussion. Dobson notes that he is not in the position to tell the students what should or should not offend them, and asks to hear their point of view. The students respond that they have no tolerance for hate speech. Dobson makes the argument that being a professor makes him inherently anti-Nazi since he is using the right of free speech in teaching. The students rebut that the playing field is entirely skewed by societal standing, him being a white, male, tenured professor, and them being his students. They also point out that the video of him has sparked genuine anti-semitic acts on campus and question his intent. This is the turning point of the discussion. While it was previously a productive conversation about free speech on campus, it quickly turns sour. Dobson says that they are willfully villainizing him by suggesting that the intent of his solute was to propagate neo-Nazism when it was clearly taken out of context. The campus police show up, unbeknownst to Dobson, and the students assume it is to keep them in check. Their composure breaks and they revert to cancel culture chanting “Dobson out.”

There are some pressing questions being wrestled with here. How should students stand up for themselves, their beliefs, and social justice issues, in a respectful and productive manner? How far should an administration go to protect the reputation of a school? Can cancel culture be productive? Are people obligated to apologize for unintentionally offending others?

I have some thoughts of my own, of course, conclusions drawn from the show and my own experience, but what I really want to highlight is how the show presents this issue with impressive balance. Neither professor nor student is villainized by the show for dealing with the issue how they see fit. There are some obvious imperfections, but there is also a lot of valuable conversation coming from both sides. This creates a unique opportunity for viewers to feel that their opinion is being both represented and challenged, and hopefully, creates empathy towards both viewpoints.

However, because the show presents more questions than answers, some viewers have taken the work and twisted it to fit their biases. For example, one online blogger, Naomi Schaefer Riley from Desert News, takes a pretty jarring stance saying, “ignore the students” and “now it doesn’t seem to matter whether students are on campus four years or four days or four hours. They are in charge.” When she watched the scene, she saw a perfectly guilt-free administration, and over-sensitive, entitled students. Similarly, Alexander Larmen from the blog Spectator World calls the students in the show, “a deeply unsettling bunch, only too ready to stand on their metaphorical soapboxes and start shouting about white privilege and safe spaces” and goes on to suggest that actual students today are “10 times worse than The Chair can suggest.” Ouch? Thank you?

Whether the show executes the presentation of the topics it addresses perfectly or not, it does exactly what it sets out to do; get people talking. By presenting the characters as human beings, deserving of empathy, the tone of the show is less condemning than it is simply addressing or exposing. Had the show presented a particular opinion, as many shows do, by villanizing characters on the opposing side, it would have only contributed to the polarization and hatred that emanates throughout our country today. The show creates awareness and space for conversation about the issues that plague our society.

Though there is no clear conclusion to these issues presented, The Chair has some important things to say. In regards to the issue of free speech, Sophie Gilbert in an article for the Atlantic eloquently suggests this as the show’s intended major takeaway, “the rifts between the generations seem impassable, and yet the thing the series suggests might unite them is the one thing they can agree on: that whatever art, language, and literature might mean to different people, they’re always worth fighting for.” I’ll plant my flag on that hill.