Lloyd the Deplorable by Kristina Carpenter (with author commentary) 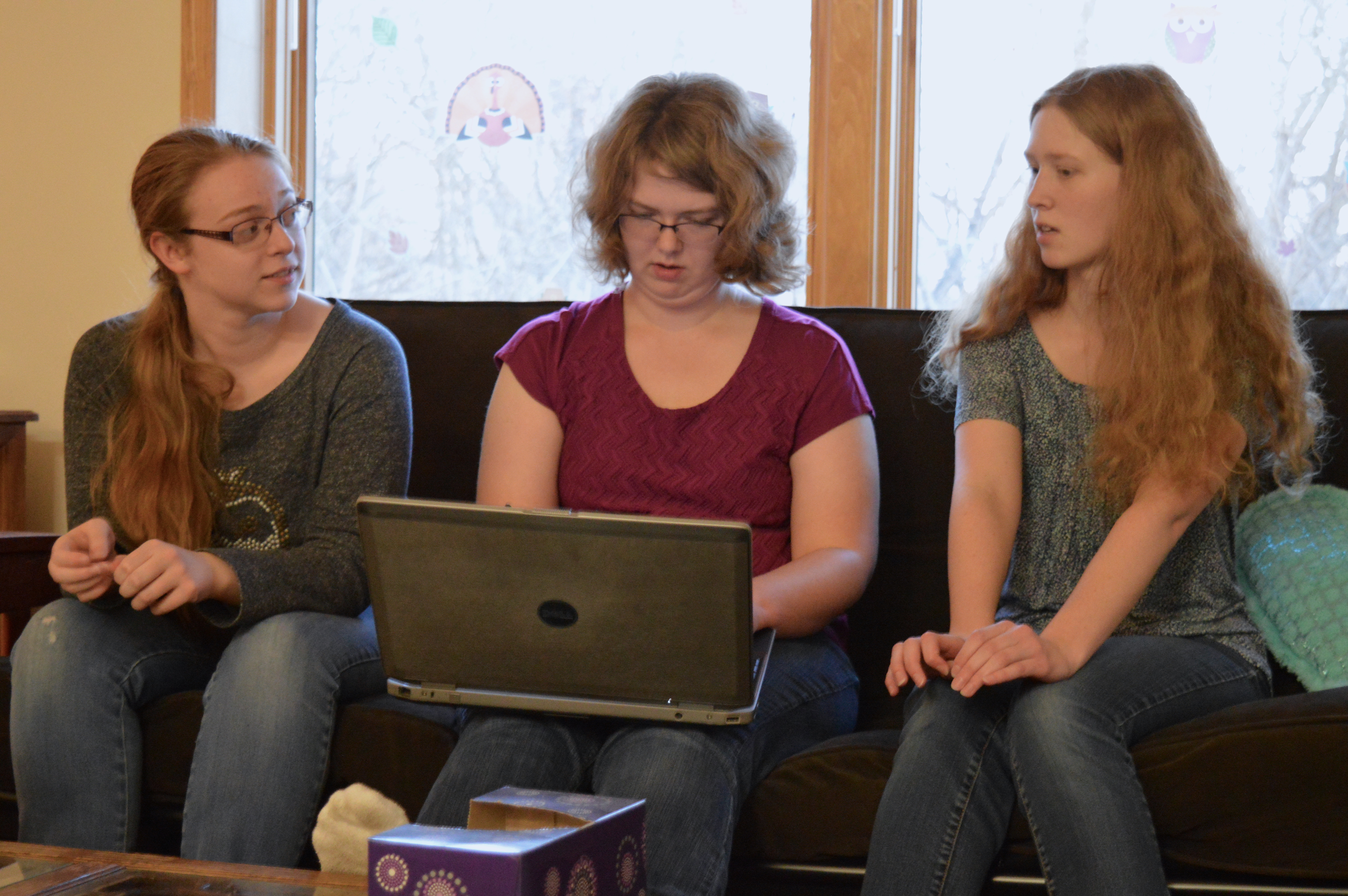 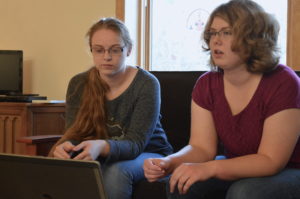 Henrik, a young man in his twenties, walks into the lobby of his apartment building to find AGATHA, who is roughly the same age and is sporting a wedding ring, waiting.

AGATHA. Good morning, have you seen your grandmother today? She left four hours ago and hasn’t come back.

HENRIK. Where was she going?

AGATHA. She went to the grocery store down the block. We were supposed to go to the opera tonight, and she’s not answering her door. Did she have to run another errand?

HENRIK. I don’t think so. I’m feeding the cats tonight. Maybe she forgot.

CHARLIE. (to AGATHA) Hey, sweetie! Ready to go yet? I got the car back from the shop, and we’re good to go. Where’s Mary Sue?

AGATHA. You didn’t happen to see her on your way back from the shop, did you?

CHARLIE. (confused) No…Should I have?

HENRIK. I have the key to her apartment. Let’s go in and look. I hope she hasn’t fallen…

They walk down the hall, and Henrik opens the door to be greeted by the cats. The three walk around the apartment, and it’s strangely clean. No one is there.

CHARLIE. Whew! Whoever you hired to clean HER apartment—send them our way!

HENRIK. The nurse hasn’t been around for a week. We were just about to hire a new one after the first one disappeared.

AGATHA. It’s too bad. It was so convenient having the nurse just next door to her, too! But Lloyd said she had to go—a family matter, apparently. He says he’s about to sign a new lease for that place.

The door bursts open, and JOSIAH enters, huffing and leaning on his cane.

JOSIAH. I tell you, I heard noises this morning coming right through the floor! What’s Mary Sue doing down here anyway? Throwing a party?

HENRIK. No! No one’s throwing parties! When did you hear those noises? What did it sound like?

JOSIAH. It sounded like someone was throwing a dang party in here—all that bumping and bustling about! I couldn’t get any shut eye with all that racket the old lady was making! I swear I heard plates breaking and stuff falling, and…

Henrik looks around at the spotless apartment.

HENRIK. Nothing’s broken, Josiah. This place is cleaner than it’s been in ten years.

AGATHA. Maybe she went to get a few things for Thanksgiving dinner. That would explain why the apartment’s so clean. I heard she was inviting everyone in the building. Lloyd told Charlie yesterday how much he was looking forward to it.

HENRIK. Yeah…I’m sure she’ll be back in a few hours.

CHARLIE ushers JOSIAH toward the door and takes his wife’s arm.

Hours later, in the lobby of the apartment, the police are talking to Henrik and his landlord, LLOYD. They are sitting at a table. A police car sits outside as AGATHA and CHARLIE enter.

POLICEMAN. …We’ll keep an eye out for her. If she’s lost, we’ll find her.

He exits, leaving his chair crooked and far from the table. LLOYD gets up to adjust it and push it in.

CHARLIE. What’s going on? Mary’s not back yet?

AGATHA. You called the police? Is it that bad?

LLOYD crosses over to the counter and straightens the papers, looking between them and grunting.

HENRIK. She’s been missing for hours…

LLOYD. (aside) That’s why you should have put her in a home with the other crackpots.

HENRIK. …There wasn’t anything else to do. I couldn’t just sit here.

AGATHA. I do hope she’s alright, and she missed such a good opera! She’d been looking forward to it so much…

CHARLIE. This is serious, Agatha. Who cares about the opera? She could be lost, or hurt, or even dead.

HENRIK. You’re not helping anything, Charlie.

CHARLIE. What? I’m just being realistic.

LLOYD. At least one of you is.

Exasperated, LLOYD exits and slams the door behind him.

AGATHA. What’s the matter with him?

HENRIK. This is a hard time for all of us. Think of all the tenants he’s lost in the past few years, and now to have one disappear. He and Mary Sue were always good friends…

CHARLIE. If Lloyd could make friends.

AGATHA. If he didn’t have to have things just so—or issue warnings to us over the tiniest things…I’m sure he’d be a great guy.

CHARLIE. Like when we left the wrapper on the counter?

HENRIK. Or when Mary’s cats barfed on the linoleum in the kitchen? It cleaned up just fine, but he issued a warning anyway.

CHARLIE. If he didn’t check in on us all the time, he wouldn’t be so bothered by it.

Enter JOSIAH in a flurry, waving a battered journal in the air.

JOSIAH. I found the book, I tell ya!

AGATHA, CHARLIE, and HENRIK together: What book?

JOSIAH. This here diary, that’s what! There’s a traitor amongst us!

CHARLIE. Oh, get off it, old man. You’re ridiculous.

JOSIAH. I tell you—one of us is a killer!

CHARLIE. I’ve had enough of your ridiculous conspiracy theories! Remember when he thought Daniel was an FBI agent?

HENRIK. Yeah, and then he turned out to be a plumber. Too bad he moved out so quickly. I never did hear what became of him.

AGATHA. Me neither. He was so nice, too—although he did have a tendency to leave his socks everywhere. I found one right outside our door once.

JOSIAH shoves the book in their faces.

JOSIAH. He’s in here, too! They’re all in here! Every blasted person that’s left this place in the past ten years!

They gather around the book and read.

HENRIK. September 6th, 20–, that kooky nurse Sheila who orders takeout every night is done for. The smell is unbearable! I can’t be the only one choked to death by it, and I won’t…And on September 8th: Found a new residence and drove her out of the city myself. Her new neighbors won’t be bothered by her habits. They won’t even notice; worms aren’t bothered by much.

JOSIAH. July 4th, 20–, this will be a holiday to remember. For two years, Jay has been leaving his trash by the stairs. Idiot has a short memory. Today, it seems he forgot the top stair…

CHARLIE. April 22nd, 20–, Daniel has left his wet socks on the machine for the final time. I am issuing his last warning…

HENRIK. But it can’t be LLOYD! He seemed so concerned about my grandmother! Is there an entry about her?

JOSIAH flips to the end.

JOSIAH. Nothing yet, but I wouldn’t put it past him to write something if I leave this thing here on the counter.

CHARLIE. But he’s already checked the counter. That must’ve been what he was looking for earlier.

HENRIK. Where did you find that?

JOSIAH. On my way downstairs earlier to check on you lot at Mary Sue’s—didn’t have time to read it then, so I took it back with me.

CHARLIE. Well, I know where I’m taking this.

The Lobby: the police have arrived, sirens blaring. LLOYD is handcuffed, and the residents are gathered together.

JOSIAH. Yeah, where are the bodies?

LLOYD. Enjoying the view six feet under in the filth they so clearly loved!

AGATHA. You can’t have killed them just because they were dirty!

LLOYD. Do I need any other excuse? They’re expensive to clean up after, disorderly, and chaotic in my pristine apartment building!

HENRIK. I don’t know why my grandmother trusted you!

LLOYD. Because I run an orderly establishment, even if she treated it like a pigsty. I told her to get rid of those dirty cats, but she wouldn’t listen. I told her to put her dirty dishes in the sink like any ordinary human being. I even reminded her six times about that thick layer of dust that covered everything—from the television set to her bedsheets! It was up to me…

The POLICE, with the diary, usher LLOYD out the door.

LLOYD. (from outside) …and I was so close!

HENRIK. What did he say? So close?

CHARLIE. Then she’s not dead?

JOSIAH. You’ve got ears, don’t ya? That’s what he said!

AGATHA. Then where is she?

Outside, a car door slams, and the door of the building opens. MARY SUE enters. Everyone rushes toward her, exclaiming. She drops her bags.

HENRIK. Where have you been?

MARY SUE. Well, I just couldn’t find a turkey big enough around here, so I had to go forty miles out…and then I saw that they’ve got the Christmas stuff in stores already, and that reminded me that I better buy presents for all you grandkids before everything sold out or there got to be long lines—I’m too old to wait outside—so I spent the night with your uncle Bill.

AGATHA. Why didn’t you call to say so?

MARY SUE. I tried to call you on that fancy phone Henrik insisted on getting me, but I just couldn’t figure it out! I didn’t think you’d worry—you kids go out for hours and hours all the time—so busy, I didn’t think anyone would miss me.

JOSIAH. Miss you, you crazy old cat lady! What about that opera? Agatha had to yarp at me about it!

MARY SUE. Opera? But that was next week…No? Oh, well, I’m so sorry. If I’d known I’d have put it off until next week, but Bill and I had such a grand time. We watched a program on the…

MARY pulls out a turkey.

MARY SUE. But look at this bird! Bill raises the best turkeys around here; I don’t know why I didn’t think of him in the first place! Who’s going to cook it with me? AGATHA?

AGATHA. Of course, Mary. And I can tell you all about that opera you missed…

The two of them exit.

CHARLIE. When do we tell her about Lloyd?

JOSIAH. After I eat that turkey.

He exits, following the women.

CHARLIE. Suit yourself, but don’t expect Josiah to keep his mouth shut.

HENRIK. It’ll be full of turkey for a while, so it might not be a problem. He’ll move onto another conspiracy soon enough.

CHARLIE. What’ll it be this time? Genetically mutated vegetables at dinner?

HENRIK. As long as it’s only a conspiracy this time.

The two laugh as they walk offstage.

This short play was written as a collaborative effort. As the coordinator, I didn’t know what to expect, except chaos and some sort of story as the end result. The collaborative process worked surprisingly well, although much differently than I had originally outlined when I wrote the proposal at the beginning of the semester.

Initially, I had envisioned a sort of improvisational story, which was partially the case. However, this was where the chaos came in, though not to the degree that I had pessimistically anticipated. A lot of suggestions were thrown out rapid-fire (and then there were times when no one knew what to do next, of course), but the group was very good at deciding unanimously what they wanted.

It wasn’t until toward the end that we actually knew how we wanted to end the story. A number of ideas were laid on the table—have Lloyd kill Mary Sue or to have the residents discover her alive but abducted in the basement of the apartment, etc.—but it was Sarah who brought us to our end result, with the suggestion that Mary Sue wandered off and had almost nothing to do with Lloyd whatsoever. From there, everything more or less sorted itself out, especially with Abigail’s skillful use of Josiah’s character to propel the play to its finish.

Kristina Carpenter is a recent graduate of Bethany Lutheran College with a degree in English. She enjoys creative writing in her free time and collaborates with friends and family on some of her work.