“The Adventures of Pinocchio” Review by Ruth Kennedy 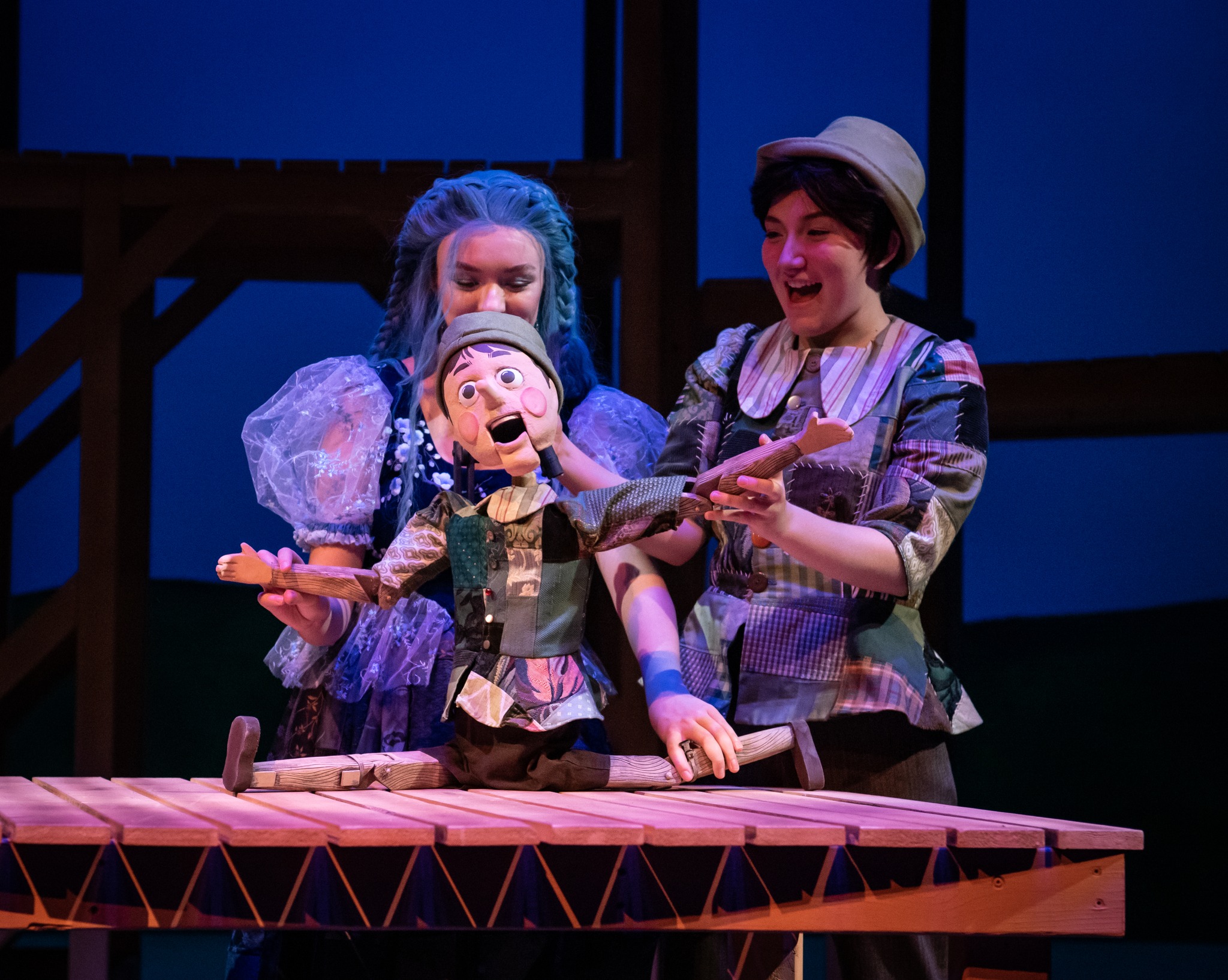 Many of us are familiar with Pinocchio, the story of a troublemaking wooden puppet who wants to be a real boy. There have been numerous adaptations of Carlo Collodi’s 1883 children’s novel, each offering their own twist on the original story. As winter quickly closed in, the Bethany stage sprang to life with the debut of a new version of Pinocchio’s tale, one filled with action, intrigue, comedy, and heart.

Written by Bethany theatre professor Peter Bloedel and his son, Bethany graduate Hans Bloedel, The Adventures of Pinocchio is an adaptation of the story by Collodi, which was originally published in a serialized format in a children’s magazine. This gave the first story of Pinocchio a meandering feeling, as each week Pinocchio would have a new adventure, meeting new characters before moving on. The Bloedels were presented with the challenge of turning this collection of little stories into one connected tale that suited the storytelling tastes of modern audiences.

The result is an exciting and engaging fairytale narrative, where characters rhyme their way through a series of adventures. The entire play is written in rhyming verse, which anyone who has tried to write in rhyme can tell you was an ambitious undertaking. Watching the leaps and tricks that the Bloedels had to do to fulfill the show’s rhyming scheme was, at least for me, a joy. The rhyming scheme also gave The Adventures of Pinocchio an air of storybook whimsy, bringing to mind childhood stories and fun.

While the Bloedels provided them with an excellent script, this show would not have succeeded without the actors who brought its characters to life. Pinocchio (senior Mizha Overn) is played with an infectionsely youthful charm and energy. At the same time, this character is repeatedly giving into his flaws, and the audience is left just wanting this little puppet to finally learn his lesson and find his family. Pinocchio proves to be an enjoyable protagonist to watch, eagerly taking the audience along on his fantastical journey to becoming a real boy.

The result is an exciting and engaging fairytale narrative, where characters rhyme their way through a series of adventures.

Pinocchio is guided by mentorship from his father, Gepetto (freshman Michael Lazzaretti) and Cricket (freshman Noah Lippert), both characters giving off an air of wisdom while also getting moments to be hilarious. Another important figure in his life is the Blue Fairy (sophomore Caroline Gernander.) The script gives the Blue fairy a central role in the show, a presence that continually flits in and out of Pinocchio’s life. The two have the relationship of an older sister and her younger brother, and Gernander and Overn’s chemistry creates touching moments between them.

Aside from a few main characters, the rest of the cast makes up an ensemble that brings dozens of characters to life on the stage, making Pinocchio’s world feel full to the brim with lively people. Side characters like a drowsy-voiced innkeeper (PSEO student Tavia Kovaciny) and a mysterious man who apparently lives in a rolling box (senior Colin Trueblood) are only a few examples of the memorable ensemble characters brought to life in a flash on the stage. Tricky and downright frightening characters are also brought to life, such as the ne’er do well boy that leads Pinocchio astray, Lampwick (sophomore Andy Boese) and the terrifying puppet master and ringleader, Fireeater (freshman William Froman.)

The story also features several notable duos that play off each other perfectly. There are the two marionettes, Punchinello (junior Holly Harris) and Harlequin (freshman Coleton Pringle), who exemplify the stylized physical movement that the whole cast engages in. There is also the pendant duo of the Crow (senior Libby Kassuelke) and the Poodle (freshman Jaksyn Graham), whose constant contradictions and odd quirks are hilarious. On the more nefarious side of things are the Cat (senior Greta Bloedel) and the Fox (sophomore Nick Pleiss), a pair of conniving thieves who lead Pinocchio astray.

Aside from its story and characters, the design of The Adventures of Pinocchio works splendidly to bring a fairytale world to life on the stage. The set of this show is absolutely stunning, featuring a full circular track with stairs, a bridge, and moving pieces, along with a  beautifully painted proscenium behind the track. Designed by Greta Bloedel, the set gives the play a sense of kinetic movement, with three moving platforms that were able to be shifted to a new setting. For a story where Pinocchio and his companions move from location to location in an instant, this set proves vital to moving the story forward and presenting it in an engaging manner.

The costuming of The Adventures of Pinocchio is also magnificent. Costume designer and Bethany professor Emily Kimball outdid herself with this show, creating a warm patchwork aesthetic that tied the various and sundry characters of this show into one fairytale story. Each costume shows a care and attention to detail, down to the smallest ensemble part, that immerses the audience even more fully into this fantasy world. What is even more impressive that the beauty of the costumes is the sheer number of them. In a show featuring eleven cast members acting as ensemble, switching between characters in an instant, Kimball had her work cut out for her.

Pinocchio is probably one of the most famous puppets in history, and this play delved into the art of puppetry to make many of their characters come to life. Alongside Overn’s acting, the crew built an actual Pinocchio puppet, which was puppeteered by Overn and and Gernander to take full advantage of the puppet’s large range of motion. Another notable puppet character was the Cricket, puppeteered by Lippert. This character was actually represented by multiple puppets, as the character got progressively beat up over the course of the show. The play also took advantage of puppetry to depict some of the more fantastical elements of the show, such as when Pinocchio rides on the back of the Crow.

With lighting and sound design by Bethany professor Benji Inniger and a crew headed by the stage manager (sophomore Daryan Rosenthal) and the assistant stage managers (senior Giana Peterson and sophomore Caleb Schulte), the technical aspects of this show were wondrous to behold. With the fairytale setting, the lighting did not hold back, soaking the stage in atmospheric hues throughout. The show’s music and sound effects also gave it a sense of energy and adventure, a wordless narration that moved the story along. This show also runs at an insanely quick pace, with actors constantly on and off the stage. As someone who works backstage, I was continually impressed by how the crew kept the show and its many, many moving parts on track.

The lively show literally spilled off the stage, with some of the actors even ending up running amok in the audience. This is a story that took full advantage of the rapport between a live audience and actors, inviting us to step into the magical world of Pinocchio, to experience it alongside it.

One of my favorite things about this adaptation of Pinocchio is that it could have only taken place on the stage. Theatre conventions and tricks abound in this show, with visible lights and props, puppeteers acting alongside their puppets, and actors popping out of trapdoors. The lively show literally spilled off the stage, with some of the actors even ending up running amok in the audience. This is a story that took full advantage of the rapport between a live audience and actors, inviting us to step into the magical world of Pinocchio, to experience it alongside it. As someone who has loved theatre for nearly my entire life and studied it here at Bethany, I was enchanted by the love for the theatre that this adaptation displays. The Adventures of Pinocchio, from its writing to its acting to its design, puts on full display the dedication and care for the craft of all involved in the production. Even the casual viewer can see that this show is full of challenges and opportunities, and every minute of hard work that went into this production can be felt on stage. The show took joy in bringing some of the back-stage tricks of the theatre onto the stage, while keeping just enough hidden to create a sense of wonder and magic. I believe that shows like this one are a testament why these children’s fairy tales persist to this day, and present a convincing argument for adapting these stories on the stage. From beginning to end, The Adventures of Pinocchio is everything you want from a good fairy tale: exciting, heartwarming, and most of all, magical.