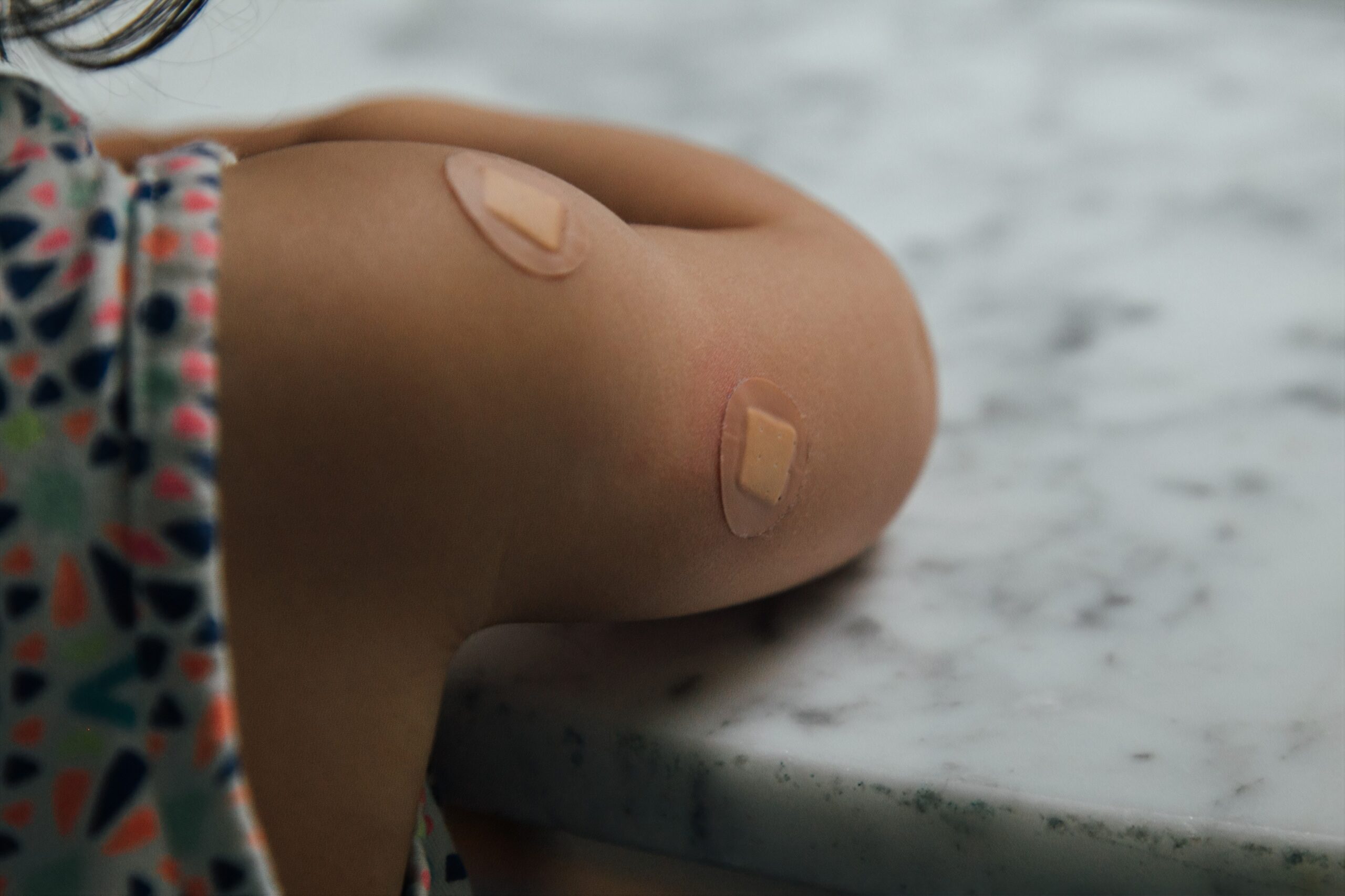 I mean, honestly, who doesn’t?

The raw trepidation of the whole process is absolutely terrifying. It all starts with going into the doctor’s office, with the small gleam of hope that maybe, just maybe, I won’t have to get one this year. After the endless questions from the nurse, then the doctor, and then standing up, the bending over, the deep breaths in and out, in and out, with the coldness of the stethoscope seeping into my skin… Another nurse comes in with her little box of supplies, and the hope is deftly doused and smothered into oblivion.

It’s going to hurt, it’s going to hurt, I think, as the nurse cleans my upper arm with rubbing alcohol and a small swab of cotton. The coldness of the liquid is a knife of fear in my gut. The cotton is pulled away and the nurse readies her deadly saber. And oh, how I try not to look, but my eyes catch a glimpse of the long, terrifying needle about to plunge into my tender flesh.

And as much as I don’t like them, it’s not the needles themselves that are so scary. I mean, yes, they are pricks (pun definitely intended), but it’s the apprehension, the knowledge that I’m going to be in pain that’s so frightening.

As a young child, I couldn’t handle that trepidation in the slightest. The mere mention of a shot would send me into a frenzy. Seeing the needle would prompt me to fill my lungs with the deepest of breaths and howl my indignation, my panic, my anxiety for all the world to hear. (The world of the pediatrician’s office, that is.)

This was an annual occurrence that transpired when I was one, and then two, three, four, five, and then… well. A week or so after my sixth birthday, Mama announced to me and my four-year-old sister, Jasmine, that we would be going to the doctor’s office that day.

Jazzy’s eyes grew wide. “Will we.. have to get a shot?” If it was even possible, she hated them even more than I did.

Mama shrugged. “Probably.” She was never one to sugarcoat the truth.

I remember riding in the backseat of our minivan, looking out the window, listening to the happenings in our car. Autumn, our youngest sibling at the time, was calmly sucking on her pacifier. Jazzy’s lip was pouting and her chubby cheeks were wobbling as crocodile tears were pouring down her face. Mama and Papa were talking in low voices at the front of the car.

It was then that I decided I wasn’t going to scream when I got my shot.

Maybe it was because I was a Big Girl. I had just lost my first tooth on my sixth birthday, watching Michael Phelps swim lap after lap, winning yet another gold medal.

Maybe it was because I knew Jazzy was going to scream and wail at the doctor’s office and I didn’t want to add to the cacophony of sound.

Maybe it was because I figured it was time to be the bigger person, the bigger sister, and let Jazzy take the role of outwardly expressing her discomfort.

Maybe it was because I figured it was time to grow up.

Regardless of the reason, that fact remains that, after the height and weight measurements, the blood pressure check, the bending and the standing and the breathing, it was time for a shot.

And I didn’t make a sound.

Mama, who was in the room with me, was flabbergasted. She told me later on that she was fully expecting this doctor’s visit to be the same as the others – with me screaming until my throat was raw.

I can’t even begin to express the pride I felt at holding true to my goal. I told myself in the car that I wasn’t going to cry, no matter what, and I didn’t. As an unexpected reward for my efforts, both Mama and Papa were very proud of me. I grinned, the dark gap in my teeth proudly displayed.

That was a turning point in my life. Oh, don’t get me wrong, I still hate shots. But I’ve hated crying in front of people even more, and I’ve done my absolute best not to ever cry in public again.

I spent most of my childhood in a townhouse in Vernon Hills, Illinois, a Chicago suburb. At the back of the house was a shared courtyard where all the neighborhood kids played together. When I was around seven or eight, my friend Gretel was pulling me around and around the courtyard as fast as she possibly could. As exhilarated as I felt at the sheer speed of the ride, worry bloomed in my belly, and I gripped the sides of the Radio Flyer wagon tightly. Gretel was charging around the corners of the sidewalk and just as I was wondering, “What if it tips over?” The wagon tipped over. I tumbled to the ground, scraping my elbows, my knees, and my chin on the rough concrete. I lay there for a second, shock pulsing through me. And then I was hit with an overwhelming wave of pain.

Gretel was a tomboy. I looked up to her, admired her ruggedness. I didn’t want her to see me as weak.

I nodded, trying to force the tears out of my eyes, my lips trembling. “I’m okay,” I gasped. “Lemme just… get some band-aids.”

I staggered over to my house, feeling weak and lightheaded. I closed the glass door behind me gently, collapsed against the kitchen table, and then I sobbed.

It was the start of my fourth year at elementary school. After a particularly exhilarating recess, filled with a fiery competition of Lava Monster, one of my best friends, Sammy, realized she had lost her headband. I can’t remember the significance of the hairpiece, but I know it was important. When she realized it was missing, she became so distraught that she began to cry – tears leaking out of her eyes and slipping down her cheeks, her breath hitching as she tried to relay how critical it was that we – Tiki, Seo Young, and I – help her find it. I was worried about her, and of course I wanted to help, but at the back of my nine-year-old mind I wondered:

How could she cry in front of us like this? Isn’t she… embarrassed?

Witnessing other people crying has always made me very uncomfortable. Should I attempt to comfort them? Should I leave them alone? I never know what to do.

As the oldest, I’ve witnessed my younger siblings cry for many different reasons and on more than one occasion. They might have broken their favorite toy, or maybe they got in trouble and couldn’t play with friends, or they were forced into a stuffy outfit to wear for picture day at school. They didn’t get their way and so they chose to express it in one of the only ways they knew how: with flushed cheeks, balled fists, and ear-splitting wails. In the past, when I noticed that my siblings were in obvious distress, I used to go over, kneel beside them, and try to pat their shoulder or hug them. Anything to make them feel better (and to stop my ears from bleeding). But each time they would shove me aside, screaming “DON’T TOUCH ME!” and “GO AWAY!”

My definition of public crying hasn’t been a stagnant one; rather, it has slowly changed over time.  In the past, “in public” used to mean anywhere outside my house and anyone outside my immediate family. Now, though… now it means in front of anyone, including my own immediate family. I’ve been taunted and teased about crying by my younger siblings.

I can’t remember specific instances: what caused me to lose all sense of self-control and start bawling. The specifics of what Jasmine said in response and what I said in retaliation. If the parents were told, if I just let it go. What I can remember; however,  is her harsh words, her jeering face, and the feeling of deep, deep worthlessness. When I’m at my lowest point, I can’t afford to be mocked, to feel ashamed of expressing how I feel. So no. I don’t cry in front of anyone.

However… I realized that if I had no outlet for the firmly-corked emotions that were bottled up inside, I would, quite simply, explode. At home, a seemingly tiny, innocuous annoyance would cause me to snap. My fists would clench and my body would tense and my throat would become raw from a single, relieving scream of pure rage. And, at the moment, it would feel so good to express what I was feeling, even if I had to give in that animalistic fury. But then the “good” feeling would be washed away by the look of shock on my family member, the subject of my ire. I would escape then, bolting to my room, not being able to bear the look on their face. I didn’t want to hurt them and I didn’t mean to at all.

It’s not healthy, and I don’t like raising my voice, no matter how satisfying it is in the moment. So, in response, I turned to writing as my escape. I poured all my negative feelings, experiences, and emotions into my many, many notebooks. It felt as though I was talking to an invisible friend, one who would be content to listen, one who wouldn’t judge, one who’d carefully cradle the weight of my secrets, my burdens, my teenage tales of woe. Journaling, at first, was certainly difficult, (how was I supposed to transfer my bewildering thoughts onto a simple, white piece of paper?). But, with practice, I soon developed my own rhythm. I wrote pages upon pages, leaving my brain weary, my eyes burning, and my hand cramped. The payoff at the end was amazing, though. When I had finished an entry, my heart felt considerably lighter, and my stomach, once full of roiling emotions and anxieties, had calmed.

Journaling was, and is, my emotional release, my escape. I at least have some sort of outlet so I won’t have to resort to bursting into flames of uncontrollable passion. I won’t have to resort to displaying my emotions in public, however accidentally. And there were, in fact, a few accidents. I’m human, and so I slip and have let my true feelings show in a display of sniveling despondency. There are lapses in my protective barriers, lapses that I will not discuss.

Because then I will become emotionally exposed, pouring my heart onto paper not for an invisible friend, but for a very real, tangible audience. That is a form of publicity, and I do not cry in public. After all, it’s such a vulnerable feeling. Like when a needle is jabbed by a not-so-patient nurse into a tender part of the body. And honestly, I’d rather save myself the emotional rollercoaster and just get the shot.