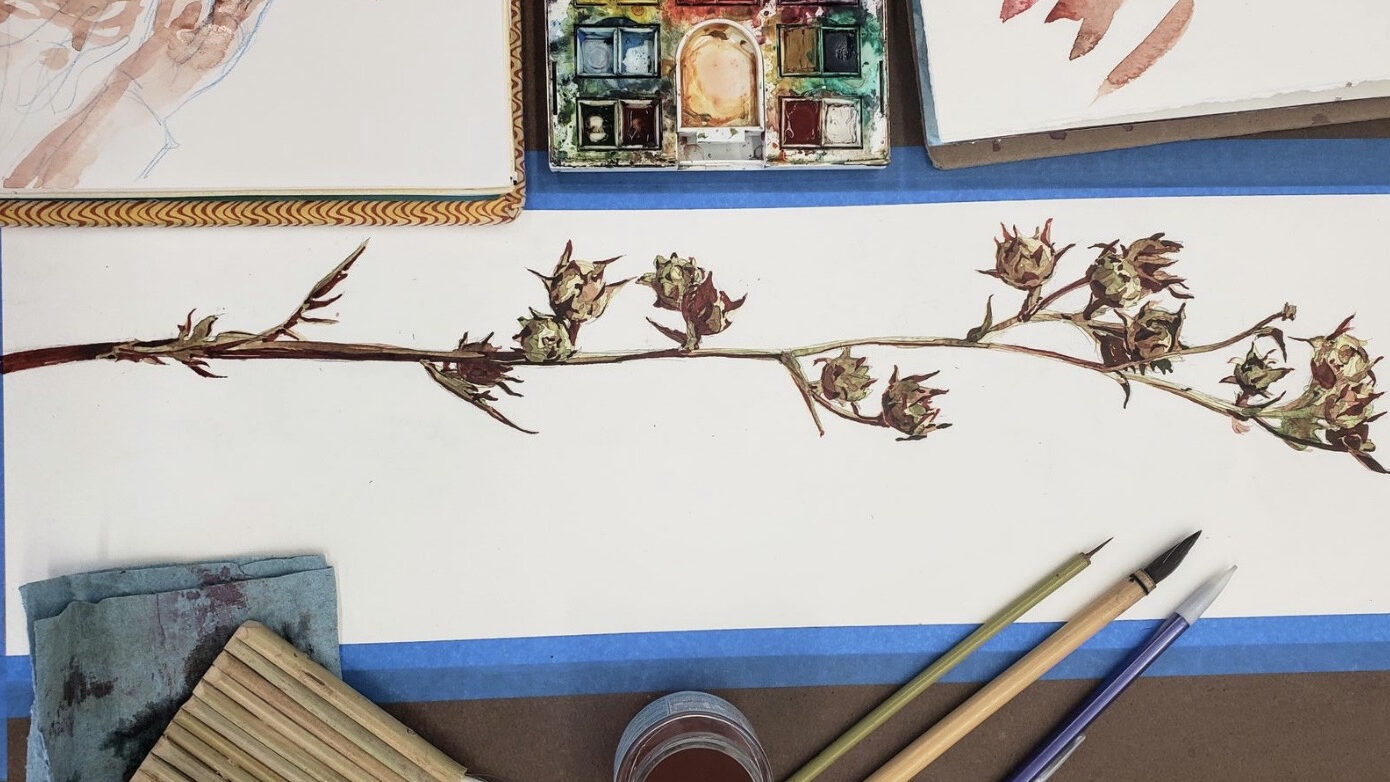 On Monday, October 4th I was working in the Writing Center covering a shift for Maida Jaspersen while she attended the annual Red Eye Film Festival for which she collaborated on the creation of a film. Since I was working for her and was therefore not able to see the screening, I thought the only just punishment to pronounce was to make her tell me all about her creative process with this film, as a studio art major, and as a creative in general.

I first asked her to tell me about her film and the inspiration behind it. Maida told me that she is in an audio/video production class so she was required to create a film for the festival. Her groupmates in this endeavor were Brady Kappel and Taylor Theiste. Each group received a prompt based on old romance novels; theirs was “blaze of silk.” She explained that while she was brainstorming, she realized that the year before she lived across the hall from a girl, Arryanna Rosburg, who did aerial silks. The group chose to stray from the typical idea of a narrative, and instead, they created,

“a poetic documentary of [Arryanna] and her love for [aerial skills]… Her strong arms holding her up on all this fragile material that almost looks like liquid… Usually, you’re scrolling through life. When you’re forced to look at something for more than 10 seconds you notice more and more. I just wanted to showcase this beautiful thing, and I think we did that.”

I asked her how it feels as an artist to have her work put on display, especially in the context of the festival. She told me,

“I didn’t compare our film to anyone else’s, first because ours was not narrative-based, but also because [many of my classmates] are on an entirely different level. I’m a very amateur filmmaker, but I’m a lot more developed in my drawing skills, for example. Comparison is an easy trap to fall into, but not a productive one. It’s beautiful to do things you’re not good at. It’s beautiful to be an amateur… It’s a big world and we are very small and very young. There’s a lot to learn.”

She remarked that she was happy with their finished product and asserted that she felt good about sharing it because, although it can be scary, an important part of the creative process is showcasing the work. She explained that her group’s goal was simply to make something they were proud of. Although the project provided a wealth of limitations, Maida stated, “Creativity thrives under limitations… Having limitations are having clear-cut problems to be solved. The most terrifying and crippling thing to a creative is staring at a blank sheet of paper thinking of how many infinite possibilities there are.”

Since this particular project was not Maida’s primary medium, I wanted more insight into the kind of work she produces on a more regular basis; her processes, and the rituals involved in creating the art she excels at. She confided that it’s a weird time for her to be talking about the creative process. Right now, she’s working on is being okay with not constantly producing and just taking a step back. “Like Ecclesiastes 3,” she said, “there is a time for everything.”  She explained that, in order to make anything, she needs input, and that’s what she’s focused on now. Nothing is totally new, she explained. It is not for us as humans to create anything new, we just combine what we have in different ways, and we need a lot of input in order to produce that. She noted that this is the benefit of a liberal arts college, being able to learn from people in a variety of disciplines. She gushed, “I love seeing people make things… I love that part of being at Bethany. There are such interesting and competent craftsmen around me all the time.”

“Nothing is totally new… it is not for us humans to create anything new, we just combine what we have in different ways.”

She went on to tell me that whatever project she’s working on, she goes through a process of collecting and then subtracting. She said she works with broad ideas and then works towards the details. “What I’ve learned from drawing,” she expressed, “ is that you can’t jump to the details. You could draw a perfectly detailed, beautiful eye and then move on to draw a nose, but it’s going to look wonky if you don’t know where they’re supposed to be on the face.” She told me that to create anything, there needs to be a foundation. Not only for the piece but for yourself. “It takes a lot of energy to just be a human and take care of yourself,” she opined. “A plant won’t flower without water and sunlight. It takes extra effort to have new, fresh growth, and it’s beautiful when there is, but it needs to be cared for.”

With the upcoming art show opening on December 2nd, I asked Maida to tell me about her submission and how she went about making it. She explained that one of her assignments in Painting I was a botanical watercolor that she particularly enjoyed creating. Working with watercolors, she said, is like working with a cat. It does what it wants and it will probably make a mess, but that’s what makes it fun. She chose to paint a tall, almost wooden-looking plant. She suggested that it’s easy to paint what you think you see, the image you have in your head of what a flower is supposed to look like, but for this project, she focused on the drawing itself and paid close attention to the detail in the shape. After this, she proclaimed that she indulged herself first by using rich brown ink and then working the watercolors over top. She said the painting doesn’t look identical to the flower, it’s not quite realistic, but she enjoys it so much because the painting looks the way the real flower felt to her.

“There’s a quote by Austin Kleon,” she told me, “‘do good work and share it with people.’ It’s easy to share these days, but making good work takes time and effort and that’s really what being an artist is.” She said that art shows like this are a perfect way to live out that quote and share your hard work. She voiced her excitement for the show and all the different people involved. “Creative things take time. It’s interesting to see what people prioritize and put their time into,” she remarked.

To be completely honest, I think I enjoyed having this conversation with Maida even more than I would have enjoyed actually seeing the film festival. Her insights left me with a lot to think about and a fresh spark of excitement for the campus-wide art show. Plus, I found her words ring true. Without my limitation of not attending the film festival, I too would still be staring at this blank sheet of paper.