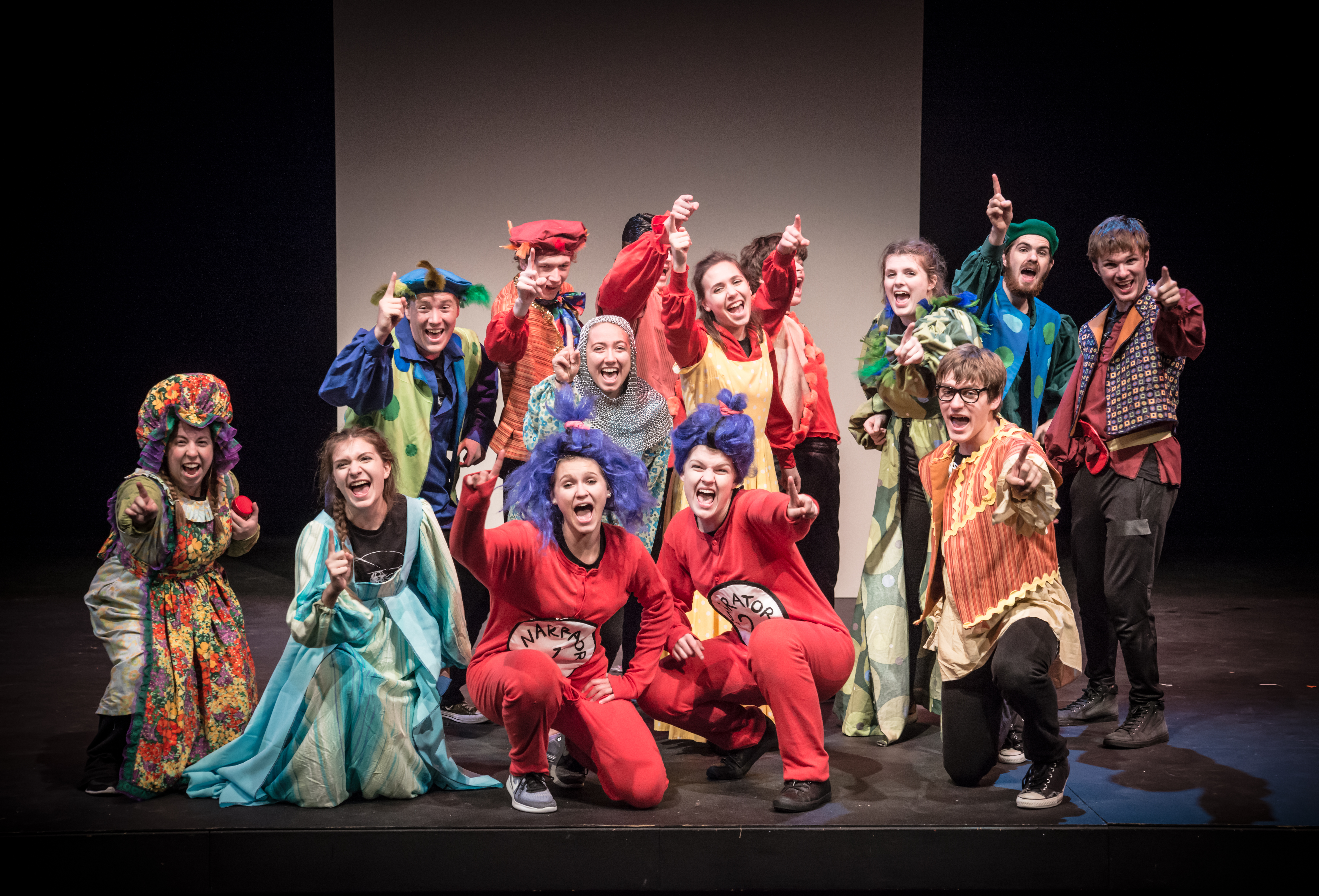 Almost a month has passed since Bethany Lutheran College put on yet another successful Theatre Physics show.  However, this year’s performance was particularly special in that it marked the 25th anniversary of Theatre Physics.  Since 1994, the BLC Theatre Department has been entertaining audience members with fun, collaborative comedy.  Typically, the whole show is developed within a two and a half week rehearsal period. Yet, even more impressive is the show’s rate of success and its astounding international influence.  As Director Peter Bloedel noted in the show’s program, “A number of [the] original scripts have moved from Theatre Physics into an international arena. They include: The Seussification of Romeo and Juliet, The Rules of Comedy, A Play with Words, The Distracted Scholar’s Guide to Literature and Drama, and The Hallmarks of Horror, culminating in over 4,300 performances around the world.”  With such a strong reputation, Theatre Physics has become a beloved tradition for students, staff, and fans from the general public.

For those who are a part of Theatre Physics, the experience is like nothing else.  Stage Manager Kate Nusbaum recalls, “It was really fun!  The first few rehearsals were all the kids just brainstorming ideas for what skits we wanted to do and then we were watching past Theatre Physics and picking out which skits we wanted to reuse because they haven’t been used in a while.”  Because this year was the 25th anniversary, the Theatre Department decided to perform some of the more popular skits from past years’ shows as a commemoration.  Thus, the world-renowned one-act play The Seussification of Romeo and Juliet was featured in the show’s Anniversary Spectacular as well as a few other classic Theatre Physics skits.  A new skit even highlighted the various prop weapons that have been used throughout the show’s lifetime.  Some of the more interesting weapons included a rubber band machine gun and a cannon that shot vaporized projectiles.

With so many commemorative skits, in addition to a few new creations, Nusbaum says, “I like to think this Theatre Physics was a little different.  It was pretty physical… the ladder and the TV remote scene, that was pretty physically strenuous with the jumping… and then running around people.”  Assistant Stage Manager Joe Finken agrees and comments that in addition to the physical demands, the show required lots of props. Finken recalls how the “Open Door” Skit “was a full-cast thing… [and] involved everyone… We had a separate prop table just for that.  Everyone was basically running around the entire time.” This year’s “Open Door” skit was particularly unique because in the typical Theatre Physics production line-up, only the last skit includes the whole cast.

Overall, although the Theatre Physics process can be strenuous and exhausting, participants love the experience and continue to return each year.  Nusbaum, who also acted as Stage Manager for the 2017 Theatre Physics performance, enjoys the process despite the accompanying stress.  She says, “It is fun. I like watching how everything takes place and formulates, how the order of the skits goes.”  Both Nusbaum and Finken believe in the magic of Theatre Physics and look forward to future performances as the tradition continues.  Together, they confidently assert that, “Theatre Physics is special because it’s the best half-baked live performance that you’ve never had to pay for.”