Black Coffee and Action Figures: A Profile of Nick Kaminsky by Haley Sisson 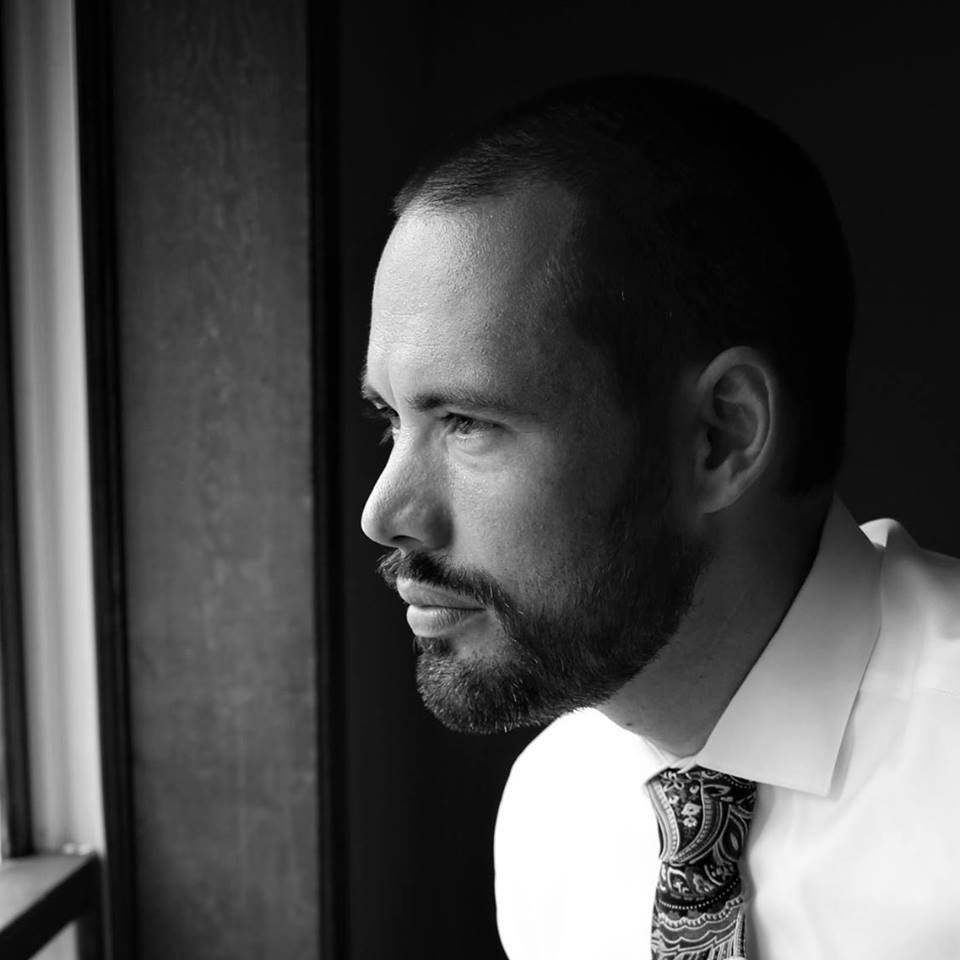 All I knew about Nick Kaminsky before I met him was that he was a history professor and author, so I imagined him as an older man with grey hair, glasses, wider build and a low voice, a very stale personality and quite possibly a very simple life. When I meet Kaminsky, he doesn’t quite match this. He’s wearing a light blue dress shirt with a dark coloured tie and dark dress pants. He has dark hair and a bit of facial hair, but under that facial hair you can see the facial bones under his long thin face and light skin complexion.

I’ve arranged to meet Professor Kaminsky in his office at Bethany Lutheran College where I know he will feel comfortable and where I can see how he operates outside of the classroom. One of the biggest surprises to me is finding his office space in a pretty orderly fashion—books on the shelves, nothing scattered on the floor—but the biggest shock are the absent posters or pictures on the walls. His office smells of black coffee and paperback books. He seems like the kind of guy that will stay up late to work and get maybe six hours of sleep every night. He seems busy, as he’s a history professor at Bethany and high school seminary teacher at Saint José Sánchez del Río Minor Seminary. I learn his day begins at 5:30 am every morning, most often with scraping the snow and ice off his steps. He heads either to Bethany or the seminary depending on the day and his classes. When he gets to class, he always tries to hand out papers to each of his students. “It forces me to learn their names. I always hated when my professors didn’t take the time to learn their students’ names.”

There is a Lego pirate ship on the corner of his desk that has started to accumulate some dust. As we chat, he notices I keep looking at it and asks if I want to see it. Of course I say yes. Professor Kaminsky tells me the ship had belonged to his brother who majored in history, and at some point when his brother was moving, Kaminsky came across the ship and decided he had a good home for it—on his desk. He proceeds to also show me the Batman action figure that sits high up on the window ledge, which I also began to stare at considering I could see it every time I looked at Kaminsky. He says he’s always had a fascination with Batman and at times some of his inspiration comes from Batman, like his Tiny Tim character. They have similar traits and in some way makes him feel connected.

Tiny Tim is, of course, a Charles Dickens character, but it’s also one of Kaminsky’s characters in his book, A Christmas Carol II: The Rise of the Juggernauts. The book is set twenty-five years after Dickens’ A Christmas Carol and features a wide range of surprising and sometimes hilarious twists to Dickens’ world. Tiny Tim has spent years learning martial arts and become a ninja warrior. He faces up against a mechanical army of Juggernauts.

Now, hearing Kaminsky talk about the little figures in his office, the world of Kaminsky’s imagination seems somehow illuminated. Power Rangers action figures sit on their own shelf as if nothing would look even close to decent sitting next to them. I could tell out of all the other action figures in his office, these are the most important and significant to him. Professor Kaminsky tells me a story about how he had all four of the Power Rangers growing up, and when he was twelve years old, his parents donated all of them to a garage sale thinking that Nick no longer cared for them. He never saw them again until something quite incredible happened. A couple weeks ago, the seminary school where he teaches had a garage sale and some of his students went and had looked around. They found all four of the action figures and bought them for Professor Kaminsky only knowing that he liked Power Rangers. When Professor Kaminsky arrived to his class the next day, they were waiting for him. Kaminsky shows me the Star Wars spaceships sitting on his book shelf. He has always been a Star Wars fan but what really got him going was his cousin, a professional writer who helped him explore the idea of writing. With each action figure Kaminsky shows me, he gets a little more excited that someone is showing interest. It seems as though he could talk about them for hours on end.

I’m interested in learning more about his work and writing process, so I begin to ask him questions about his book. He got the idea in the winter of 2014 and waited a while before starting to write in summer of 2015. He was finally able to complete the novel and publish on Amazon Kindle in the fall semester of 2016. One of the first questions I asked was if he was writing for a certain audience or if there was a select group of people he wanted to reach. It didn’t seem so; if he had, he would have changed bits and pieces from the story he really wanted to write.

I asked Kaminsky about what made him chose to write and what got him to the place he is now. “I was always a drawer when I was younger but I also started writing and I realized I ended up being better at writing than drawing.” After that, he began finding his passion that stemmed from a family tradition of reading Charles Dickens every Christmas. Nick wanted to write about Dickens because of his interest, but he also wanted put his own twist on it. When asked what his purpose of writing this book, his answer was very simple and clear: to get people interested and “to write a really good story.” Further, as a professor at a college as well as a teacher at a high school, writing a book is considered a big accomplishment.

During the period of writing, he was hit was some very bad luck. The tone shifts in his voice as he begins to explain probably one of the scariest moments in his life. He developed a brain hemorrhage that caused him to not be able to continue to read and write for months on end because of the severe headaches and pain it would cause.

Once Nick could finally continue working and was able to complete his book, there were many people who read his drafts and enjoyed them, to Kaminsky’s surprise. He had help from multiple outside sources to help him edit and make his book become what it is. Ramona Czer, a professor that taught at Bethany Lutheran College years ago, was a name that was mentioned quite often when I asked Kaminsky about his writing. “She was one of the first people that helped me and encouraged me to self-publish. She was also one of the first people I had asked to help me edit my work.”

I ask Professor Kaminsky if he had advice for other people going down a path similar to his. He seems to hesitate, as if he doesn’t want to say something wrong. “Always have someone besides a family member or friend proofread your work. Family and friends are more likely to sugarcoat how they really feel about your work and you are less likely to really improve your work. Someone who isn’t as close to you will get the feedback you need to make you better. I recently gave my high school class a copy of my book, and I was even able to get feedback from them.” He was hungry to hear the feedback from honest high school students who weren’t afraid to give him the truth.

At the end of our meeting, it seems like we could sit and talk for a couple more hours and there would never be a moment of silence. In the weeks ahead I’ll have a few more chats with him, and somehow, each time I’ll leave our meetings with curiosity to know more. Posters or no posters—who knew that simply a cup of coffee and childhood action figures could make anyone feel at home?

Haley Sisson grew up in Minneapolis, MN and is a sophomore at Bethany Lutheran College majoring in Communications. During her time at BLC, she’s also been a part of the Women’s Soccer team.